The past few weeks has been one filled with a myriad of emotions. First there was anger and despair at a system who was so vested in suppressing its young or in killing it. Then there was hope. Hope in our voice. If we couldn’t save the lost, we could ensure that it comes this far and no more.
And so we spoke up. With one voice. United in our cause. Not for selfish reasons but because we identified that each of us still alive could be a victim the next second. Not because of criminal acts but just because we are alive.
For over 10days we spoke. In most cities of Nigeria there was an expression of the #endsars movement. Leaderless, uncoordinated yet very coordinated. Our collective pain was our leader. We asked for one thing- #endsars

SARS- the police unit charged with combatting armed robbery and other such criminal activities had made the people its enemy and took advantage of every moment to inflict terror on its victims.

The survivors of SARS’ told of wicked happenings beyond our wildest imaginations. They told of the dead, never to be heard off.

Of a truth, SARS is just a symptom. Reality is the Nigerian system seeks to strike you down and keep you there every step of the way. Every Nigerian citizen- home and abroad has a story of Nigeria ‘happening’ to them. It’s so bad that a few have found ways to exploit the corrupt system in a- ‘if you can’t beat them, join them’ move.

And so the Nigerian citizens- young enough to still believe we could make a change took to the streets in peaceful protests across most cities of Nigeria for SARS’ reign of terror was devoid of the usual sentiments such as tribalism that had plagued Nigeria since time immemorial.

The protests heralded hope for a new Nigeria. Never have a majority come together, putting aside their differences as was witnessed in those days. We witnessed individuals adept at coordination and accountability. Donations were recieved, disbursed and accounted for.

About 2 weeks after the protests began, after several attempts by the Nigerian government to pacify its citizens with platitudes, the tactics changed. We witnessed events that though unverified but can only be state sponsored terror. On the night of Tuesday, 20th October 2020 after a hastily declared curfew by the Lagos state government, military officials opened fire on peaceful unarmed protesters at the Lekki tollgate.

It’s been over 72hours since that event. The Lagos state government has attributed it to ‘forces beyond its control’. The Nigerian army is confused in its denial, the presidency refuses to acknowledge the event and rather gives a vague but threatening address.

Post that address- the Nigerian people are still hurting. A lot are demoralised. A few are still hopeful but one thing is clear- it’s not over.
I speak to us young people, whatever next steps you choose are valid.
Should you choose to leave and continue the fight from the diaspora, please do. In the recent battle, the voice of our diaspora brethren magnified our cause.
Should you chose to stay and continue the fight from within, as in the words of Nelson Mandela- we cannot win a war, but we can win an election. That choice is also valid.

What would be wrong is that having come this far, we give up and become that which we despise. We must not join them because we cannot beat them. We mustn’t sell our voice for a few coins.

We lost people in this battle. Painful to think of, I can only imagine what their families are going through. People sadly lost their source of livelihood in the breakdown of law and order which followed.

This battle is a marathon not a sprint. We cannot and could not have changed anything significant over two weeks for indeed SARS was just a symptom of a deep seated rot which must be excavated to make room for a new Nigeria. Therefore, as we say in our local parlance, we have tested our mic. It works. The battle isn’t won or lost. Most of all it isn’t over. We move!

Hope 2017 was good for you? Good or bad; we are in 2018 and there’s a lot to look forward to: brighter future, fulfilled wishes, greater blessings and Russia 2018! lol (you all know I love football tournaments, right?)

So, this year should be the year of no excuses, write down your dreams, make it plain, hold yourself accountable, kick ass this year and here are my wishes for you: may all your wishes be met, may all your dreams come true, may you find that which you seek. Here’s to a greater 2018; have a blast!

It’s the beginning of the 2nd quarter! The first quarter was a blast, or was it? Lol!

Personally, I felt like it dragged. But….. We’re happy to see it go. And this month is Easter!!!!

So, as we begin the 2nd quarter; I  wish us all God’s grace and blessings. May this month be all that we wish it is.

Have a great month y’all, wishing you Joy always.

Its the third month of the year already, how are we doing with the New Year resolutions? (I shouldn’t have reminded you about that, right?)

Anyways, how are you doing? The Christian Lenten season begins today, I wish my Christian brethren a healthy 40 days and may all our prayers be answered. Amen.

Happy New Year darlings, may this year be all that we wish it to be. may all good things come.

Have a great year y’all!

Every year since I started this blog, I write a ‘Motivational’ article which I publish on the last day of the year. This year, I would love for you all to read my epilogue here. That was me sharing a bit of what my 2016 was about.

I have a word for us all, it was a response I gave to Betty Irabor’s tweet sometime ago 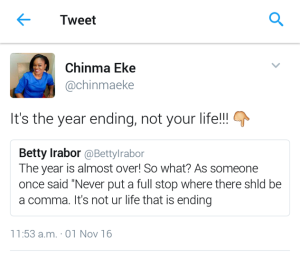 This words are as true today as they were on the 1st of November. It is the year ending and not your life. And just as the age old saying goes; where there is life, there is hope. I wish us all a great 2017; our latter will always be greater than the last. 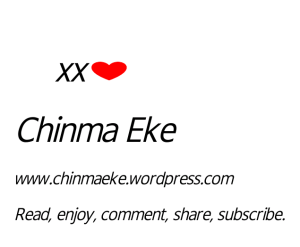 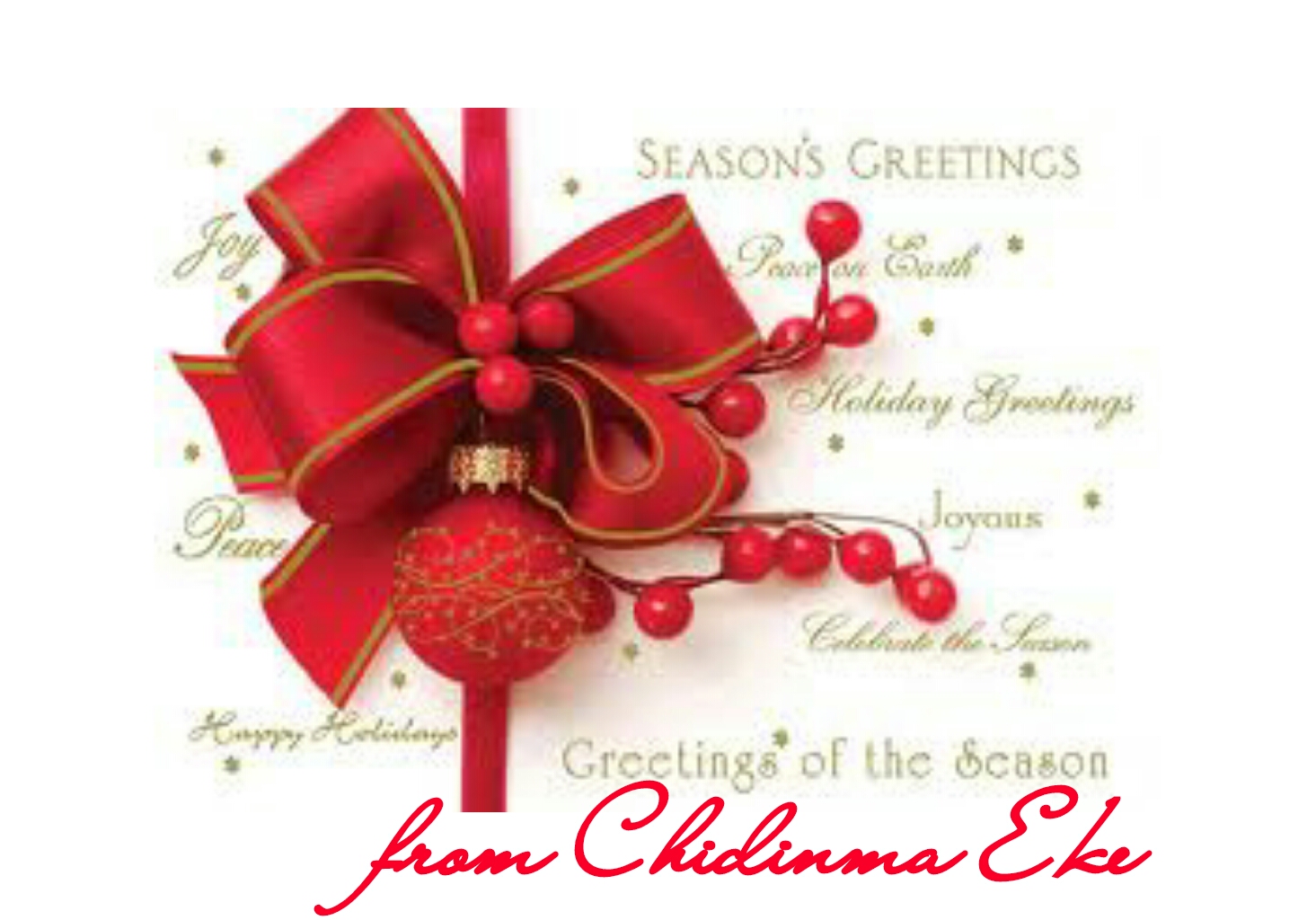 I wish you and yours peace, joy, and all the best this season has to offer.

Have a happy holiday.

How have you all been, I hope the first eleven months of 2016 have been good to you? If it hasn’t; don’t loose hope, don’t despair, that you are alive means there is hope for better.

So, we are in the last month of December; Christmas is around the corner along with its attendant excitement and pressures (yes pressures). The best advice anyone can give or receive in this day is ‘live one day at a time’. I encourage us all with these words, I ask that we do not give in to the pressures of the season. Trust and believe in the one in whom you believe knowing that He is able to do exceedingly abundantly above all you could ask of Him.

So, on a lighter note; my tree is supposed to go up today. Between the eight-to-five and traffic I’m not sure today is possible. But by Saturday my tree will definitely go up. Not feeling very festive, as I’m sure a lot of us aren’t; but this little things go a long way to lighten our hearts and moods. I encourage us to try to enjoy the season, if for no other reason but to appreciate the reason behind the season.

Have a blessed month, I wish you God’s grace.

It’s November!!! The month of thanksgiving! How are you all, hope you had a good October?

It’s that time of the year when the thought of the ending year causes us to take stock and count our blessings. However, most of the time we are stuck in counting the things we have prayed for that we are yet to get and we end up feeling frustrated and or discouraged.

I pray for you that as you go through this season you find peace and comfort in knowing God always gives you what’s best for you, at the right time. I pray we all go through this month with thanksgiving in our heart and lips.

Have a great month you all.

It’s September! The year is wounding down.  How are y’all doing? Hope August was good for you?

Each day presents an opportunity to do better, to take the joys, pains and experience of the past and do better.

I pray for us all that this month will bring exceedingly abundantly above all that we have asked in Jesus name; amen.

Have a blessed month! 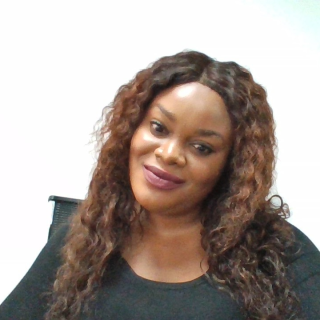